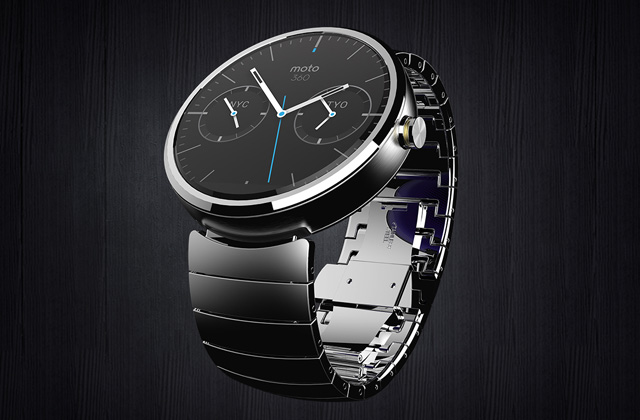 What do The Jetsons, James Bond and just about any sci-fi show from the 60's have in common? The answer won't surprise you: they all portrayed a high-tech future in which wearable watches evolved into a gadget-infused extension of ourselves. Inundated and completely enamored with this vision, we became fixated on how these devices would function according to the classic sci-fi and adventure shows of years' past.

In this day and age, that seemingly unrealistic vision of their future is now here. And although our phones aren't going away anytime soon, the all-in-one wristwatch communication device will be a part of our lives in the years to come.

In today's world of personal communication devices and software, there are two juggernauts that completely dominate the ever-evolving landscape: Google and Apple. While both have succeeded in pushing their brand of smartwatch and/or software onto the scene (with Apple's "Apple Watch" soon to be released), one thing remains clear: there are major differences between each brand, and loyal customers from the smartphone era continue to fuel competition between both companies in the smartwatch age.

Today, we're going to go over some of the pros and cons of the more popular watches from both companies: the Moto 360 and the Apple Watch.

*As a side note, we just wanted to warn you that Google may have a slight advantage over Apple in this review simply because the the Apple Watch hasn't been released to the general public as of the writing of this article. Therefore, we will wait until the Apple watch is released before doing a complete review.

When the Motorola Moto 360 made its way onto the waiting wrists of tech-savvy consumers, it delivered a visual impact that completely set itself apart from the competition. It was one of the few smartwatches that didn't look like a smartwatch. In fact, if you knew nothing at all about smartwatches and saw this technological marvel on someone's wrist, you would probably think it was a traditional timepiece. 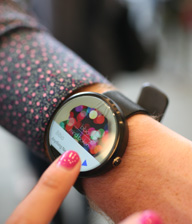 Weighing in at only 1.76 ounces, the Moto 360 boasts a stainless steel case, a scratch-resistant Gorilla Glass face, 512MB RAM, 4GB internal storage, and your choice of stainless steel link or genuine Horween leather bands. Simply looking at pictures of its magnificent exterior doesn't do the watch justice. It's something you have to fully experience and feel to really appreciate.

Powered by Google's Android Wear, you'll be able to do just about anything you can currently do on your Android Smartphone. In fact, you can use the "OK Google" voice command to set appointments, input reminders, send texts, ask for directions and search the web, just like you do on your Android-powered phone.

On top of the voice commands, your Moto 360 conveniently works with most Android apps, so you can receive notifications on your wrist, without digging out your phone at inconvenient times. Of course, Google will continually add apps over time (it's what they do best), so you can stay updated on the latest and greatest smartwatch software.

Before the Moto 360 launched, there were concerns about its battery life. Although it's a valid concern, the 320mAh battery in the Moto 360 is designed to last for a full day (depending on usage). And if you're too lazy to plug in a battery charger, no worries! The Moto 360 comes with a wireless charging dock - you simply place your watch on the dock at night (without attaching any wires whatsoever) and it charges while you sleep!

Oh, one more thing - it also displays the time and date (and you can change the look and feel of your watch face with a few swipes of your fingertip). After all, telling time is the point of owning a watch!

Overall, we feel that the Moto 360 has a slight advantage over the Apple Watch in terms of its visual appeal. The round face is a classy example of merging new technology with vintage, familiar products. The fact that the watch face can be customized to your personal preferences means there's no limit to where you can wear your smartwatch!

Stay tuned for our Apple Watch review as soon as it's released!